Reputations can be earned by completing certain Quests or taking part in certain in-game Events. When your Reputation Level rises, you are granted access to new items, equipment and abilities or simply receive a regular reward.

Click the Reputations button in the game's main screen to open a convenient intuitive interface that displays your progress with each Reputation. Here you can also get information on items and abilities that have already been unlocked or will be unlocked when you acquire enough of one of the Reputations.

Warriors who gain certain Reputation levels are rewarded with special Medals. These Medals are displayed above your character in the character info screen.

Two types of Ratings are available to compare your Reputation progress to other players: Total Reputation Rating and breakdown into separate Reputations.

Below is a comprehensive list of all in-game Reputations along with their level prerequisites and rewards that will unlock as you complete Quests and Reputation-specific Events.

Completing Quests
• After a quest is completed, it becomes unavailable during the indicated cooldown time.
• When the cooldown expires, the Quest will once again be available for completion.

Canceling a Quest
• To take a different Protector Quest, cancel your active one, return to the NPC who issued the Quest or to the Notice Board and take a new one.

The amount of Reputation that you receive for inflicting a Curse on the enemy depends on the type of Bonecrusher Sphere: 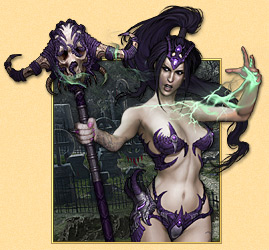 Warriors of level 16+ can learn the secrets of Necromancy under guidance of Ani-Dahlia, a member of Velet's Vigilant Guard, who will teach you the ability to summon the undead Skeletars into battle. To master this dark craft, you will have to complete all of Ani-Dahlia's Quests.

When you do, Fionites will appear in the Shop, magical crystals that differ through types and strength of summoned monsters. You will be able to purchase weaker Fionites right away, but on order to gain access to more powerful crystals, you will have to earn Vigilant Guard Reputation and complete respective Collections.

Hero of the Empire

Corsair Reputation is unlocked at level 22 along with Sea Battles.

It can be earned by:
• exchanging Golden Piastres for Corsair Chests and opening them (15-25 Reputation);
• completing Gunner, Defender, Sailor (50 Reputation) or Captain (100 Reputation) Collections.
• using Scrolls of Bounty Hex.

In order to earn Piastres, join a Sea Battle and slay as many Pirates as you can during the first phase called the Pirate Fort. Each slain Pirate will bring in some coins for your team. When the Sea Battle is over, you will receive your share of Piastres which will depend on whether your team won or lost the fight.

Hunter Reputation is unlocked at level 9. To start earning it, equip a Small Hunter's Kit that can be purchased from the Professions section of the Shop.

After killing a Tracked Monster, you will receive:
• Hunter Reputation;
• a chance of obtaining an element of a corresponding Hunter Collection.

Hunter Reputation can be earned when slaying Tracked Monsters and completing Hunter Collections.

Upon gaining certain Hunter Reputation levels, new items will be unlocked for you in the Reputations menu:
• Hunter Kits;
• Idol Schemes;
• Hunter Collection Warrants. After studying a Warrant for the desired Collection and gathering all the necessary components, you can use the Blacksmith Profession to transform two completed Collections into one Collection of a higher quality.

Defender of Adan Reputation are awarded for completing Quests during the Invasion of Shaab Event.

Warriors also receive Sparks of Abyss for completing Invasion of Shaab Quests and slaying Shaab's monsters. These Sparks can then be used to purchase special Items, Equipment, Mounts and a unique weapon - the Maul of Devastation - in the Defender of Adan Shop in Knossos Canyon.

Undead Hunter Reputation can be earned by:

Items that can be purchased for Reputation Points, grant their owner substantial advantages both in and outside battle. Below is a list of Undead Hunter Rewards: