Dragon Eternity allows you to summon a variety of companions to fight on your side:

• Your very own Dragon (can be obtained at level 16 after completing prerequisite Quests and crafting the Amulet of Melding);
• Mounts – giant lizard- or wolf-like beasts (you can get your first Mount at level 22 after earning 1000 Protector Reputation);
• Skeletars (available at level 16 after completing the Challenging Galad-Dir Quest);
• Charmed Monsters (available at level 9 after purchasing a Hunter's Kit, which can be used to acquire elements of Hunter Collections and craft Charmed Monster Idols).

After gaining some Experience, warriors of level 16+ can acquire a loyal  Dragon companion that will always stand by their side  . Dragons can be summoned into battle where their might and magical powers strike fear into the hears of the enemies.

Only warriors who have reached level 16 and passed all the Elder Dragon trials, collecting six parts of the Amulet of Melding, are allowed to acquire a Dragon.

In order to assemble the Amulet, following Quests must be completed:

To select a winged companion, first click on your Character's avatar in the upper left corner of the screen, then click the golden Dragon icon below it.

A screen will appear, offering you to choose an Element (Fire, Air, Water, Earth, Chaos and Order) and gender for your Dragon. A special trial combat is available to all players from the very beginning of the game in which they can fight a Dragon of their choosing to evaluate the creature's battle prowess. No Experience is granted for winning the trial combat and the player's equipment suffers no durability loss in case of defeat.

Dragons are born the same. Main difference between young Dragons is the type of their breath attack which is determined by the Element they belong to.

In battle, your Dragon can use 3 types of attack: Strike, Bite and Breath. The latter depends on the Dragon's Element.

After acquiring the Dragon, you will be able to summon it into battle at any moment. If you die after summoning, you won't be able to leave battle while your Dragon remains alive. Instead, you will be given an option of controlling the Dragon manually - or you can just wait for the battle to end.

Your Dragon gains Mastery points by fighting in battles.

When the Mastery bar fills up, you can level up your Dragon. In order to do it, open the Dragon screen and select the Training tab.

To level up the Dragon, three conditions must be met:

Abilities are magical gifts that Dragons can use in combat to empower themselves or their master, or to weaken the enemy.

Abilities are unlocked when your Dragon reaches level 17. Starting from this level and every 3 levels thereafter (level 20, 23, and so on), you will receive a Dragon Stellar. To teach your Dragon a new Ability, click on the Dragon's avatar, and then press the Abilities button. The Stellar must be activated to learn an ability. To do so, find it in your Backpack and click use.

Depending on the Ability, you will require either an Essence of the Dragon's Element or Magical Dust in addition to the Activated Dragon Stellar. Learning Abilities of level 4 and 6 also requires a certain amount of respective Reputation.

To teach your Dragon a new Ability, click on the Dragon's avatar, and then press the Abilities button. Click learn when you have all the required components.

Any Ability tree can be reset to get back the activated Stellars. However, please note that the magical components are consumed in the learning process and can't be returned.

• Lord of Element – effects that have a chance of being cast when the Dragon's natural element is used in combat.

• Consort of Element – empowering effects that you Dragon casts on you in combat.

• Dragon Power – healing and empowering effects that the Dragon casts on itself, as well as weakening effects cast on the enemies. 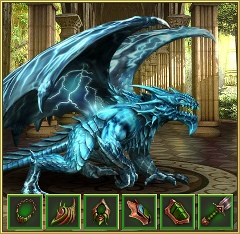 Just like warriors, Dragons are allowed to equip Armor and Weapons. Dragon Equipment is divided in a similar fashion: there are Berserk, Paladin and Witcher items and the same restriction applies that only items from one Class can be equipped at the same time.

For instance, Dragon Helmets for each Class come in three kinds, one for each corresponding School of Magic. It means that a Berserk Dragon will be able to choose from Helmets of Fire, Air and Chaos. After putting on the Helmet, your companion will be able to use a respective magical attack instead of the Dragon Bite.

Dragon Armor can be acquired:
- With a certain chance – as drops from monsters;
- From Bosses in Skrag Caves;
- Certain Ranks and Titles allow you to purchase blue Dragon Armor.

To name your Dragon, click on your character's avatar, then the Dragon icon to open the Dragon info screen. Use the Rename Your Dragon button and type a new name for your companion.

Please note that there are certain rules for Character and Dragon names. You can learn more about them here, article 3.

Don't be in a hurry when selecting your Dragon's name. Think it over carefully. When you have an appropriate beautiful name which will ring proudly as your Dragon becomes a legend, enter it in the respective field. Please note that name changes have a fee!

However, there are three more requirements that must be met:

• Your Character's level must be higher than your Dragon's;

• You must have a Prism for your Dragon's level;

All necessary items will be listed in the Training screen, which also contains information about your Dragon's Abilities at bottom-left, and how they will change after leveling up at bottom-right. Once you have all the required items, click Upgrade to level up your Dragon. With every level gained, your dragon becomes more powerful. Also, every new level unlocks more powerful Weapons and Armor for your Dragon.

Below is a table of Dragon Progression. It takes an Earth Dragon as an example. The only thing that changes for other types of Dragons is the type of Essences needed to level up.

Mounts are specially trained beasts of war. Some of them are not of this world, but have settled quite well in Tartu, serving the warriors of Sadar and Vaalor. Others — like the giant wolf-like Wargals — are a result of long years of scientific experimentation and breeding.

• increased maximum Backpack Capacity;
• Mounts absorb 1/3 of damage inflicted on you;
• Mounts allow the use of Ranged Weapons.

To purchase a Mount, you must reach a certain Character Level and a certain level of the respective Reputation. Your first Mount can be purchased upon achieving  level 22 and earning 1000 Protector Reputation.

When you gain the required Level and Reputation, open the Reputation screen to purchase the desired Mount. There is no limit to the total number of Mounts a player can possess, but only one Mount of each kind is allowed at a time.

Regardless of its quality (color), any Mount increases your Backpack capacity by 2. This number can be further improved by equipping a Bag or a Saddle with Bag on your Mount. If a player has several Mounts, all of them add to the maximum Backpack Capacity.

Using a Mount in Combat

Purchasing a Mount isn't enough to use it in combat. You must also buy a respective Scroll of Mount Summoning. After using the Scroll, you will enter all battles in the following hour on top of a Mount.

Using another Scroll prolongs the period for which the Mount is summoned.

Fighting mounted is similar to fighting on foot: the same three Stances are available as well as Spells. Mounts don't increase your physical attack strength but they absorb 1/3 of the damage inflicted on you until they runs out of Health.

Mount's can't be healed. If your Mount is killed in battle, you will continue to fight on foot. Mount equipment suffers a durability loss when the Mount is killed. In the next combat, your Mount's Health will be fully restored.

After purchasing a Ranged Weapon and a Strike, you will be able to attack any player once the enemy team once per 6 rounds. This attack doesn't take an entire a turn. Strikes can be purchased in the Shop or crafted in the

Blacksmith menu after studying the respective Scheme. The winner of the Invincible Warrior Tournament receives the Incendive Strike as a bonus reward.

An Incendive Strike not only deals increased damage, but also has a chance of inflicting Burning on two of the target's allies , which makes them take additional damage for several rounds and also reduces the effectiveness of healing Magic used on them.

Mount Characteristics can be improved with special equipment. Each Mount type has its own unique Ranged Weapon, while all the rest of  equipment is universal. Mounts can be equipped with the following items:

• Bag and Saddle with a Bag

A Bag and a Saddle with a Bag increase the maximum Capacity of your Backpack. This effect works all the time, regardless of whether you summon your Mount or not.

Ranged Weapons allow to attack any player from the opposing team once per 6 rounds as a free action (it doesn't use a turn). Available Ranged Weapons depend on the Mount type. Ranged Weapons can also be bought directly from the Reputations Screen.

To be able to use Ranged Weapons, you have to purchase a Strike in addition to the Weapon itself. Strikes can be purchased in the Shop and have different quality (color). The higher it is, the bigger the damage.

Strikes are divided into Concussing and Splitting.

A Collar protects your Mount by reducing physical damage it takes.

A Rein of Elements is similar to the Collar but it reduces magical damage.

Warriors of level 16+ can learn the art of Necromancy from Ani-Dahlia, a member of Velet's Vigilant Guard. After you complete Ani-Dahlia's Quests, she will teach you the ability to summon undead monsters called the Skeletars into combat .

When you acquire this ability, Fionites, magical crystals used to summon different kinds of Skeletars, will appear in the Shop. The weakest Fionites will become available immediately after you finish the respective adventure, but in order to acquire more powerful ones you will have to earn the Vigilant Guard Reputation and complete respective Collections.

At level 52, Myratella Kharmai will give you the Disappearance of Ani-Dahlia Quest . Completing it will unlock Fionirites, magical crystals that summon stronger Skeletars that earn you Bonecrusher Reputation when killing enemies.

After creating a Monster Idol, you will be able to summon the respective creature into battle to fight by your side (with the exception of Tournament of Honor and King of the Hill Battlegrounds). The Idol can be used directly from your Backpack or by using the quick-access slots. Idols are non-transferable items.

Certain restrictions apply to Idols:
• a substantial amount of time is required to create one;
• only 1 Idol can be used per single combat.

When an Idol is used, the monster(-s) summoned are chosen randomly from the following options:
• 5 Puny Monsters (weak)
• or 2 Large Monsters (stronger)
• or 1 Mighty Monster (the strongest).

Please note that battle companions listed below can't be summoned during the Tournament of Honor and Invincible Warrior Tournament.

Warrior of the Cursed Legion which can be summoned at level 10+ by using the Amulet of Cursed Legionnaire Summoning. The Amulet can be found in the Casket of Plenty.

Phantom
After using a Phantom Orb and killing another player in a fight, a Phantom of the defeated warrior will join the fight on your side.
Characteristics of the summoned Phantom are the same as the defeated player's, however, it's Health is significantly lower. When you earn 81000 Vigilant Guard Reputation and gain level 60, the Phantom Orb will be available for purchase in Fort Giard in Dakh-Fartul's Shop.