Adan's birthday is a time of miracles, a time when even the most incredible dreams can come true. Today is proof of that! The Elder Dragons have heard your wishes! By their order, the planets were lined up in a row, and portals to the Hoarders' Treasury were reopened all over the world!

The treasury will remain open for three days, from 12:00 on April 1 to 12:00 on April 4. During this time, you will be able to visit the Treasury up to three times.

By participating in battles with other players or battles with monsters, you can get a task "Mysterious portal" that will lead you to to the portal in A treasure trove of Grabbers located in the vicinity of Aldorsky tract. The treasury is a special territory where the Grabbers keep stolen goods. Here you will meet a lot of Grabbers, and some will not be easy to cope with. 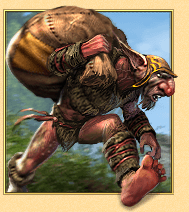 • After each fight with a Grabber, you will receive not only the usual loot, but also , and with it a curse , which will reduce your strength and survivability in battle by 4%. The more victories you win in the Treasury, the more jewels you will be able to collect, and the weaker you will become.

• You won't know in advance how strong your opponent will be. This can only be found out in battle by the color of the spell icon , which reliably acts on any Grabber.

• Be careful: if you die, the Grabbers will throw you out of the Treasury. You will be able to get there again only in 24 hours.

• After the release, the mountains of sparkling jewels you have collected will turn into golden piastres, dedair guilders, unholy coins and random collection items.

You can collect up to 50 bags in one trip to the Treasury sparkling jewels. After that you will be teleported back to Aldorsky tract.

When you get into the Treasury, you will have an additional task: you will need to defeat Grumpy Greedy. To discover it, you need to fight with ordinary Grabbers. With each defeated enemy, the chance of their mighty leader appearing will increase. You should prepare for a fight with a Greedy person with special care: he is much stronger than "red" Grabber, and can defeat an unprepared fighter with one blow. After completing the task to kill the Greedy Grump, you will receive . In addition, you are guaranteed to get reals from the bag of the Greedy Grump. Before you go on an adventure, you should know a few more important points:

• Over the years, Grabbers have learned to react faster to intrusions. Now, at the sight of the hero who entered, they begin to hurriedly hide their gold. Thus, for one visit Treasures you can get up to four purses of Incredible profit. When you collect four wallets, you will also stop receiving reals for the victory.

However, you have a way to get to the untold treasures so carefully guarded by the Grabbers! In the bag of the defeated Grabber you can find the elements of the collection "Enchanted chest of Grabbers". After collecting the collection, you will remove the locks and get . Inside there are various items of "red" quality, as well as the rarest items available only as a reward for various achievements and during Lotteries! To open Enchanted chest Grabbers necessary 3 real. If you don't want to open the chest, you can just put it up for auction!

Good luck, valiant warriors! And keep following the news - this is not the last surprise that we have prepared for you this year!