Rage of the Elements is Rampant on Tart!

A dangerous cataclysm begins in the world of Dragons!

Portals of the Six Elements have opened all over the continent of Tarth. These portals absorb magical fluids, depriving the Older Dragons of their powers and making it difficult to use spells. Every defender of Tarth will experience . Under the influence of these evil spells, it becomes much harder to accumulate mana in addition, Elemental monsters can now interfere in any battle except for battles on Arena of Honor, Ruins of the Ancient Capital, tournament of Honor, Invincible Warrior tournament and Sea Battles. If this continues, Adan will lose his magic and will remain almost defenseless before the next Shaab invasion. 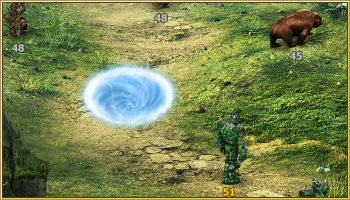 However, the defenders of Tarth have the opportunity to prevent a catastrophe. To do this, they need to perform alternately 6 tasks of Miratella Karmai and get magic Quintars in battles with other players. Get Quintars can be used in another way— attacking portals and fighting monsters of the Elements. The best magicians of the Dragon world will be able to use these particles to close portals.

Be careful: you will receive Quintars only for defeating monsters of the Elements only if you attack the portals specified in the current task Miratella Karmay. With each closed portal, the power The madness of the Elements will decrease.

In addition, warriors who have completed all 6 tasks from Miratella will receive a new task Call of the Elements. In this task, you will be asked to decide which side you will fight on: choosing one of the elements, you join the army of one of the Overlords. The selected element can be strengthened in the upcoming battle The Lords of the Elements. If the desired element is not on the list, you should come to Miratella a little later, because at the moment, the total power of the team of this element exceeded the power of the teams of other elements. Do not hesitate — you can choose the desired element only until the end of the event! Also, in case you suddenly changed your mind and decided to choose another element, Miratella will allow you to do it only once! Changing your choice a second time will not work!

All portals should be closed as soon as possible. The warriors who failed or failed to complete the tasks of Miratella Karmay will be under the influence of for the next 24 hours.Exhaustion of the Elements— their combat characteristics will be noticeably reduced. The more tasks left unfulfilled, the stronger the impact will be Exhaustion of the Elements.

If you do not have time to close all portals before the end of the event - the final battle with The Lords of the Elements will give you the opportunity to get some Quintars to complete the current Miratella task. And remember, the fate of magic is in your hands!