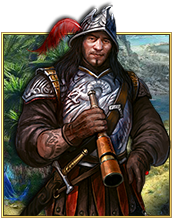 What is the Roaming Archipelago?

The Roaming Archipelago is a group of picturesque tropical islands located somewhere to the south-east of Tartu. We say "somewhere" because each new ship that arrives in the Archipelago finds it in a different place.

The Archipelago is crawling with greedy and ruthless competition, so no one goes there unless they're part of a Group. To increase your chances of survival, come along with your Clan.

Why go to the Roaming Archipelago?

The Roaming Archipelago is inhabited by a variety of unique monsters, including Kariol cannibals, sentient six-legged Rachni, carnivorous plants Flosars, and our old pirate friends from the north Torlings.

How do I get to the Roaming Archipelago?

There are two ways to travel to the Archipelago:

1. Receiving an invitation to come aboard a Ship from the Ships' Captain (you must be level 4 or higher). Captain is a member of a level 3 Clan who is the first to board a Ship. Only members with the Ship Expert permission are allowed to use Ships.

2. Joining a level 3 Clan and building a Dockyard and then a Ship together with your new Clanmates.

Inhabitants of the Roaming Archipelago

Some of the creatures you encounter in the Archipelago are unique to it and can't be seen anywhere else in Adan. Each of these rare breeds of monsters has its own traits that must be taken into account when battling them.

Flosars are carnivorous plants that are very good at dodging enemy attacks. An Elixir of Dexterity, made from Flosar Juice which is acquired from dead Flosars, will for a limited period of time raise a warrior's ability to dodge enemy attacks.

Kariols are a tribe of cruel indigenes who possess some impressive magical skills. Their magical shields absorb part of the damage directed at the Kariols. In addition to that, Kariols are highly resistant to enemy magic.  Warriors who overcome a Kariol in a fight are guaranteed to receive magical Sparks which are required to master new Magic:
- Kariols of levels 53-57 drops Sparks of Dreams;
- Kariols of levels 61, 65, and 69 drop Sparks of Reason.

Rachni are a race of sentient arthropods who use something similar to Bonecrusher Spheres when fighting you. Thus, if you lose a fight to a Rachni, you may be inflicted with a Curse. But if you emerge victorious, there's a hefty prize awaiting you, since slaying Rachni is rewarded with the largest money drops. A good way to make some big money is to receive the Hours of Prosperity from your Empire's Elder Priest and do some Rachni hunting while the blessing's active.

Pirates are sea bandits who arrived in the Archipelago after news of Sydian deposits reached them. They are powerful foes to face, but defeating them is rewarded with Golden Piastres which can be spent to your benefit in the Corsair Shop  in Port of Sadar (for Sadar) or Vaalor Harbor (for Vaalor).