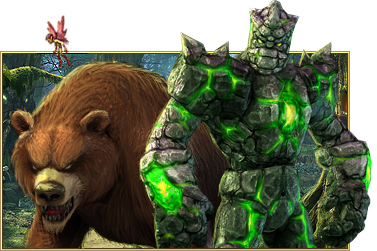 Each of Adan's monsters belongs to one of the four types: Common, Elite, Instance Monsters, and Instance Bosses.

Common Monsters can be encountered in virtually any part of the map. To attack a monster, double-click on its figure or click on it once to open the menu and select the Attack command. Monsters of equal level usually pose no threat to a warrior with good Equipment and enough healing Consumables.

Experience is rewarded for defeating monsters. There is also a chance that additional trophies will be dropped.

Elite Monsters are significantly stronger than their Common counterparts and are very tough to overcome. Your best chance of defeating such a foe is to attack them with a group of allies. The warrior who deals most damage to an Elite Monster has a chance of receiving valuable trophies.

Instance Monsters
Monsters that inhabit the Skrag Caves and Razed Fort Instances are stronger and have more Health than their Common counterparts. In addition to that, they usually don't attack alone, which makes the Instances a dangerous place to visit alone. Assemble a Group and make sure to stock up on Consumables before you go.

Instance Bosses
Not counting the monsters that appear during game Events, Instance Bosses are the most powerful enemies you will encounter. A Group member that deals the most damage to a Boss is guaranteed to receive a "green" or "blue" item.

To learn more about monsters and loot, open the Bestiary, fill in the search box, and click the begin search button. Then click on the monster image or name to get more detailed info.