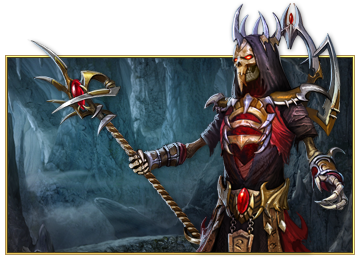 Maze of Eternity is a mysterious source of infinite magical energy. For a long time, it remained the most-guarded secret of the people of Khateram, but when the warlike race of Shivari destroyed the legendary city, the secret was revealed. Now, the alien invaders have found a way into the Maze, drawing power from it to assemble an army of the undead and create the ultimate weapon of destruction.

Before Shivari force becomes unstoppable, warriors of Tartu should venture into the Maze and drive the invaders away from our world! Sadly, this task becomes more difficult as warriors of Sadar and Vaalor also settle old scores with each other once inside the Maze...

When you receive the Rune Key, go to your Empire's main square (Scarlet Square for Sadar and Square of Storms for Vaalor) and select To Maze of Eternity from the list of available transitions. When you go to the Maze of the Eternity, the Key will disappear and Twilight Portal will be cast on you, allowing to travel around the Maze.

Moving Around the Maze of Eternity

When you have the Rune Key, you can enter the Maze and stay there until the Twilight Portal expires. When it happens, you will be automatically teleported back to your Empire's main square. Should you be in combat when the charms expire, you will be taken back to Tartu after the combat ends.

If you decide to leave the Maze, the Twilight Portal is dispelled. You can exit the Maze only from the same location used for entrance. Warriors of Sadar and Vaalor have different starting locations in the Maze.

There are two Fountains of Rejuvenation located in different parts of the Maze which you can use to replenish your Energy. Please note that the resource in the Fountains is limited and needs some time to regenerate. If someone drains a Fountain before you arive, you will have to wait until it is refilled.

Mystical energies change the shape of the Maze from time to time. You receive a 5 minute warning when such a change is about to happen. When it does, all warriors are teleported from the Maze to their Empire's main square. If the Twilight Portal is still open, you can enter the transformed Maze again.

When you die inside the Maze of Eternity, you are taken back to your Empire's main square and can return if the Twilight Portal is still active.

If the spell is running out use the second Rune Key, to extend your stay in Maze for an extra hour.

If you wish to enter the Maze multiple times during one day, come talk to Yshen Carr near the Ruins of Khateram and select Talk about a new Twilight Portal dialogue option. Taking another Twilight Portal Quest will cost you 3 Reals.

Enemies and Trophies in the Maze of Eternity

In the endless corridors of the Maze of Eternity, enslaved monsters await you along with their Shivari masters. Please note that you don't have to slay the enemies to move to the next segment of the Maze.

However, if you do fight the monsters, you will earn the Undead Hunter Reputation as well as get a chance to receive Chests of Undead which contain Sydian and

Please be aware that the Chests of the Undead can't be opened while inside the Maze of Eternity! You can only do so after exciting the Maze and paying 50 Silver. Should you die in the Maze, you lose half of your collected Chests of the Undead but can still access the Maze as long as the Twilight Portal remains active.

The last element of the Shivari Weapons Collection – the Claws of Lament – can be found in the adanbonred crates which are scattered around the Maze. However, there is a certain risk involved, as Crates might also contain a monster which you will have to fight for the Claws.

Elements of the Staff of Power Collection can be acquired by completing the main and secondary objectives of the Rune Key Quest, fighting Kaptor Khathu in the Fang Cave near the Ruins of Khateram, opening Chests of Undead, or purchased from the Collections menu.

Completed Staff of Power Collection allows you to open one Sorcerer's Ark, a special container protected by powerful magic, which you can acquire in the Maze. Arks contain Chests of Undead and Claws of Lament, a rare element of the Shivari Weapons Collection. Beware, though: sometimes, monsters hide inside the Arks, so you will have to fight them if you wish to get your hands on the Ark's precious contents.

Cursed Coins that can be acquired in the Maze are not accepted anywhere on Tartu except for one place: Ruins of Khateram. Elusive Helma who lives there trades the Coins for Extracts of Antimagic and Shivari Rings, which the fearless treasure hunter steals from the invaders' underground vaults.

Elite Monsters can only be encountered in the Maze at certain times, spawning at 12:20, 13:20, 14:20, 19:20, 20:20, and 21:20 Server Time. When fighting them, your gain of Undead Hunter Reputation is increased and depends on the amount of damage you deal in combat. Warriors who deal the most damage have a chance of obtaining a rare element of the Shivari Weapons Collection – Sorcerer's Bracelet! Additionally, defeating Elite monsters may earn you Chest of the Undead, Sydian and Cursed Coins.

Don't expect that you will be allowed to freely roam the Maze. Horror of the Maze, the notorious bounty hunter working for the Shivari, stalks his prey relentlessly, appearing from the dark tunnels when you least expect it. Once every couple of minutes, Horror of the Maze may find your tracks while you are in a segment of the Maze or moving between them. When that happens, you have exactly 10 seconds to move to a different segment. If you fail to do so, the Horror will attack you. When you go to a different part of the Maze, you will either put more distance between you and the bounty hunter, increasing the time before the attack to 40 second, or shake him off completely. Keep moving across the Maze until the Horror loses track of you.

Defeating the Horror of the Maze in combat isn't easy. Besides being very powerful, the bounty hunter will also lock the battle for other warriors, which means that you allies won't be able to help you.

When you meet other warriors in the Maze of Eternity, they can either help you in your fights or betray and attack you. Peace treaties have no effect here: anyone can join other warriors' battles on the side of the monsters, and Bonecrusher Spheres aren't required to directly attack other players. All you have to do is click the crossed swords icon in the location's player list. Spheres of Peacefulness are useless in this dark place.

A player that strikes down another warrior receives half of the Chests of the Undead, that belonged to the defeated.

Shivari and their enslaved minions have unique combat abilities that you should be aware of if you want to get out of battle with them alive.

Curses, Hexes and Banes in the Maze of Eternity

Monsters of the Maze are not only powerful, they also have the ability to inflict various Curses upon warriors of Tartu.

Additionally, when you move between different segments of the Maze, there is a chance of Hexes or Banes being inflicted upon you. Also, the Wraith disguise may be removed from you during transitions.