When you sail to the Roaming Archipelago or return therefrom or when you move between Archipelago islands, you may encounter and fight other Ships.

Enemy Ship detection:
• you can detect only Ships in vicinity of yours;
• Schooners can be detected only by other Schooners;
• Corvettes, Barquentines, and Frigates can all detect each other;
• the chance of detecting an enemy depends on your Ship's Detection and enemy Ship's Stealth (higher Detection raises the chance while higher Stealth lowers it);
• Ships that aren't carrying any Sydian can't be detected;
• if a Ship is detected and attacked (be it by other players or Torlings) then it can't be attacked again before it reaches its destination, regardless of the outcome of the battle;
• the fact that you detected an enemy Ship doesn't necessarily mean that the enemy sees you too.

Battles between Ships are divided into three phases.
1. Cannon Shootout (first round lasts for 2 minutes to give the attacked side some time to prepare for defense, all following rounds have a duration of 1 minute).
2. Preparation for Boarding (lasts for 1 minute and 40 seconds to give the warring sides a chance to stock up on Consumables and Power-Ups).
3. Boarding.

• Regardless of its Class, each Ship has 3 attack zones and 3 defense zones.

• If there aren't enough players on the Ship to fill all roles, Replicants are added to the crew under control of the Captain.

• By default, Gunners can only use standard ammo. Other types of cannonballs (armor-piercing, incendiary and shrapnel) can be purchased in advance or directly during combat.

• Best Gunners, Defenders, and Sailors on both teams receive additional rewards: Heroism and a chance of receiving an obtaining of the Corsair Collection for the respective role (please note that the combat rewards in the Roaming Archipelago are lower than what you can get in Sea Battles).

• Last for 1 minute and 40 seconds, allowing the warriors to stock up on Consumables and Power-Ups.

• The crew is randomly distributed across the Ship's Stern, Deck, and Fore.

• Replicants don't participate in this phase, only human players.

• In addition to Valor and Heroism, the winners also get the losers' Sydian as follows:

o The total amount of captured Sydian is all transported Sydian minus the percentage protected by the Ship's Cargo Safety.

o Members of the winning team receive Sydain depending on the total amount of damage dealt by them and their summoned creatures.

• Members of the winning team earn Clan Reputation amount of which depends on dealt damage.

• Players who deal most damage during the Boarding receive additional Heroism, but only if the amount of dealt damage is substantial. Please note that warriors who unequip their weapons or armor are unlikely to deal enough damage.

• The Defeated team continues its sail to its destination at a reduced speed. 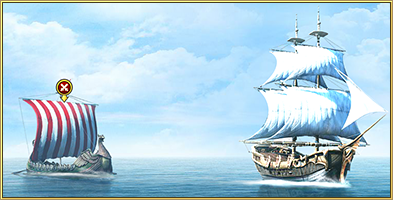 Beside other players, you may also encounter Torling Ships when sailing the waters of the roaming Archipelago. You don't have to attack Torlings, but your Ship's speed will be reduced unless you decide to fight.

There are certain specifics to combats against Torling pirates:

• Torlings from Mountain Hawk Clan are Witchers equipped with Reflection Marks for their Class. Defeating a Mountain Hawk may earn you the Defender's Chest; 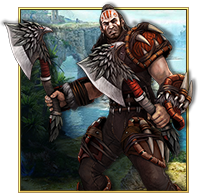 • Torlings from Snow Lion Clan are Paladins equipped with Reflection Marks for their Class. Defeating a Snow Lion may earn you the Sailor's Chest;

• Torlings from Gray Warg Clan are Berserks equipped with Reflection Marks for their Class. Defeating a Mountain Hawk may earn you the Gunner's Chest;

• Torling Chieftain and Leader have a universal Class and equip the Protection Marks. Defeating them may earn you a Captain's Chest as well as a chance to obtain a unique weapon – Axe of Bloodlust or Axe of Fatal Wounds;

When you're bored out of your mind during a long voyage, and not even a single enemy ship shows up for some traget practice, you can while away time by playing dice. This game of chance will not only add some zest to your journey, but will also fill your wallet with some coin – if you're lucky.

Gambling becomes available when the Ship you're sailing heads for or comes back from the Roaming Archipelago or when it moves between the Archipelago islands. During this time, the "Battlegrounds and Instances" button changes to an image of a die. Click it to open select a game to play.

Three exciting games are available to you on a Ship:
1. Armada: each player rolls 3 dice 4 times. Player with the maximum total points after 4 rolls wins the prize fund.
2. Three Corsairs: players take turns rolling 3, then 2, then 1 die. Each turn, only one die with the highest number counts towards the player's score. For instance, if a player rolls 6, 5 and 3 on his first turn, he gets 6 points. The player with the highest score after three rounds wins.
3. 21: players are allowed to throw the dice an unlimited number of times before the timer runs out. Their goal is to score 21 or as close to 21 as they can. Players who score 22 or more are eliminated. You can stand when you're happy with the score you've got – just wait for the timer to run out.

To begin the game, select it from the list on the left and click the Queue Up button. An entrance fee of 50 Silver will be withdrawn from your account. Please note that you won't be able to leave the queue once you click the button.

The game starts every minute. If there is only one player in the queue, AI-controlled players will be added to provide competition. Maximum number of players is limited to the Ship's maximum crew size.

All entrance fees form a prize fund. 15% of the fund is taken as a gambling tax, the rest goes to the winner of the game or is spread equally in case there is more than one winner. If the game is tied, then the prize fund is distributed equally among all players minus the tax. If the Ship arrives at the destination, the game is interrupted and all fees are returned to the players in full.