The great lands of Tartu are rich with jingly rivers and still lakes, endless seas surround them, and a Fisherman can choose from numerous location all around the continent. All of the fishing places on Adan's largest mainland can be divided into three groups: those with flowing, still, or salty water.

To catch a fish, you need to:
1. Cast the Tackle.
2. Use the Bait to lure the underwater inhabitants into the Tackle.
3. Retrieve the Tackle after some time to acquire the catch.

If you don't retrieve your Tackle for too long, the caught fish will decay and you will need to clean the Tackle from it to use it again.

Maximum number of Tackles that can be used simultaneously is 15.

Type of Catch is determined by Water type (each inhabitated by different kinds of fish) and Tackle quality . Fish of equal quality as well as fish of quality that differs from the Tackle's by one grade can be caught. For instance, mostly grey fish will get caught in a grey Tackle, but there is a chance of obtaining Catch of white or green color. In case if your current Mastery doesn't allow you to catch fish of higher quality that the quality of the net (e.g., a Fisherman with 1000 Mastery and a grey Tackle), you will only be able to acquire Catch of equal or lower quality.

This Profession differs strongly from the others, since being a Prospector implies competition with other players by literally fighting for resources. There is only one location near the Pond of Tribulation where resources can be gathered without the risk of being attacked.

In the rest of the Extraction Sites, your Workers can be attacked by another Prospector. If he manages to overcome them in battle, they will be driven out of the location and the enemy will be able to hire his own Workers to gather resources at the Mine or Sawmill. In such a case you will receive the resources that your laborers have acquired before being defeated.

You are allowed to fight alonside your Workers, thus defending them from the enemy Prospector. If the enemy loses the combat, he will have to leave empty-handed and your Workers will continue the gathering process.

1. Hire a Worker.
2. Start the extraction.
3. Collect the gathered resources.
4. Attack enemy Workers/defend your Workers. It is only possible to attack another Prospector's Workers if your Mastery level is enough to gather the resources at the respective location. Attacking enemy or defending your Workers is a free action, interfering with an allied Prospector's fight is done by using the Bonecrusher Spheres.

Maximum allowed number of Workers is 10.

Prospector hires Workers to gather resources in the Mines (Minerals and Ores) or at the Sawmills (Wood). When the gathering cycle is finished, Workers leave the resources for their master to collect. If the Prospector doesn't collect resources for too long, they get stolen.

Resource gathering rate in "public" Sites is higher than in "private" Sites.

Type of gathered resources is determined by the type of Extraction Site. Gathering speed also depends on the Site type, but please note that the gathering process might be interrupted by an attack on your employees. Worker battle stats are determined by their quality (color).

A Hunter lives by chasing wild Animals: Beasts, Giant Insects and Birds. There are two ways to do it. You can either attack Animals that inhabit Adan with the use of the Hunting Knife or set Traps and Cages to catch the game.

When hunting with a Knife, you should pick a target from the Animals who wander nearby and attack it. If you defeat the Animal, you will only be able to acquire its meat.

When using Hunting Traps and Cages, you will acquire more than just meat from all the Animal types. Beasts will additionally drop pelts and giblets, Insects will drop stings and wings, birds will drop claws and feathers.

Advanced Hunting Tools are divided according to the game type: Traps are used for catching Beasts and Insects while Cages are used for Birds.

In order to hunt using a Trap or a Cage, you should find a suitable location, set the respective Hunting Tool, place a Lure inside it and wait for the chase to be caught. When the Animal is caught inside your Trap, you need to fight and kill it while having the Knife eqipped in the Profession slot. Thus you will be able to flay the chase and receive the Resources. 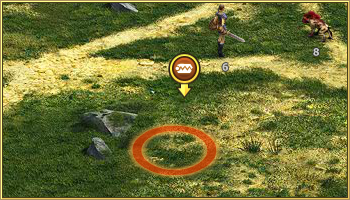 Only Animals that are present in the location can be caught, under the condition that you possess the required Mastery level for catching them. Maximum number of Traps and Cages used simultaneously is 10.

Quality of obtained Resources is determined by Animal and Knife quality.

Having chosen the Farmer Profession, you will be able to grow berries, fruit, vegetables and other valuable plants. To start the farming process, find a suitable Site on the world map. There are three Soil Types on Tartu: fertile, normal and dead. Depending on the soil type, players can grow different plants on Farming Sites.

Farming consists of the following stages:
1. Fertilize the soil after finding a suitable Farming Site.
2. Choose the Seeds  that suit the Soil Type and plant them.
3. When half the growth period expires, water the bed and come back in some time to collect the harvest.

If you don't collect the harvest for too long (more than a day after the plants have grown), it will decay. In this case, you will have to dispose of the decayed plants before fertilizing the soil again.

Maximum number of beds of all types used simultaneously is 25.