Pirates of the Eastern Seas

East of Tartu, under the blazing sun, lie the endless waters of the Eastern Seas, with their warm streams, beautiful – yet dangerous – reefs, and countless islands. Eastern Seas played a crucial role in founding of the Republic of Tartu after the Second Great War and banishment of Shaab's armies. Trade with faraway lands and wars of conquest filled the coffers of the young Republic, ensuring growth and prosperity in the greatest of Adan's realms.

The Fleet of Tartu consisted of thousands of fast, heavily-armed, well-fortified vessels, and no naval force in Adan could stand up to their organization, strength, and unity. The Sea always attracts soldiers of fortune that live by raiding and pillaging, but at the height of Republic's power, pirates rarely dared to show their faces.

Ikarim patrols and messengers were a crucial part of every ship's crew. In case of a pirate attack, they immediately left to call for help, and the sails of the swift Republican galleons would soon appear on the horizon. Retrofitted with Dedaire steam engines, deadly cannons, and fire-breathing mechanisms, these ships brought inevitable justice to the sea bandits that had only two options: surrender or die. Those who chose the former usually regretted doing so. Accomplices of thieves and freebooters were sent to slave camps, the criminals themselves always walked the same path: up the stairs to a guillotine. 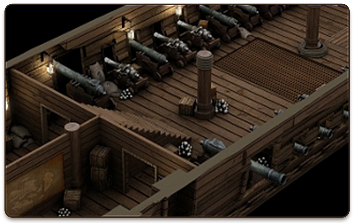 But it all changed during the Dark Ages and the Civil Wars that preceded the fall of the Republic. The Ikarim were excommunicated for refusing to participate in punitive operations against Fenris and Kinos, organized by senator Zack Kadmos. All but a few of the proud winged people left Tartu and settled on a distant southern island of Dziran. The death of Kadmos consummated Republic's collapse and the subsequent split into two parts – the Empires of Sadar and Vaalor, born from the ashes of the Republic as sworn enemies. Many years passed before the animosity between them subsided somewhat, and all the self-proclaimed rebel provinces became part of one of the two Empires.

During the confrontation, spirits of many warriors were broken by constant presence of death, ruin and famine. Having lost their ideals, their faith, and any reason to fight, they left their homes to seek a better life. But it's hard to drive a plow when your hands are more used to carrying a sword, so it's no wonder that many of the deserters never really settled in foreign lands. Instead, they assembled together, commandeered ships, and sailed them under a pirate flag, robbing merchants and tradesmen.

The pirate brotherhood, nearly destroyed in the previous years, was reborn and became stronger than ever. Nearby archipelagos, surrounded by menacing reefs, acted as perfect shelters for the sea bandits. One after another, pirate dominions emerged, and each was bolder and more daring than the last. Starting with only a small group of patched-up sloops, the pirate fleets grew to become armadas of brigantines and frigates, now posing a serious threat not only to other ships, but also to citadels and forts located on the shores of Tartu and other continents.

While the Empires of Sadar and Vaalor were busy fighting each other, the only attempts that anyone made to deal with the pirates were sporadic and simply weren't enough to put a stop to the growing danger. When the threat of another Shaab invasion became real, the warring Empires had to bury the hatchet. Yet the pirate problem is as important as ever, since water is the only way to travel to faraway lands and continents.

Both Emperors proclaimed a new stage in the war against the pirates. By order of royal edict, all warriors who wish to participate in the cause are provided with a well-appareled ship that will take them to the Eastern Seas where they will be entrusted with the task of razing pirate fortresses and sinking any ships that sail under the black flag. The edicts also say that any booty acquired during these raids is considered to be property of the finder.

But inexperienced adventures are advised not to start counting their money yet. In the Eastern Seas, one must fight for every treasure chest. In the war on pirates, every medal should – and will – be earned with sweat and blood. And even if luck smiles upon you, don't be asking the cook to open a bottle of wine just yet.

First, the pirate hunters have to safely bring their rewards home, and in the Eastern Seas, this is no easy task. Pirates are not the only threat on the way home. Returning from a successful raid, ships from Sadar and Vaalor sometimes forget about the truce between the Empires, and their confrontations tend to be as fierce as the battles with the sea bandits. Intense gun fights and bloody boardings are quite common, and crews of both Empires usually try to take as much loot as possible from their rivals.

But that's not all. Regulars of port taverns sometimes tell wondrous stories about pygmaean tribes that shoot poisoned darts, sea creatures that can swallow an entire ship and islands inhabited by carnivorous plants or shape-changing monsters. Even an experienced sailor can't separate fact from fiction in these tales. Those who wish to find out which are true must be brave enough to set sail for the Eastern Seas and see for themselves.