Main World of Adan Records of Adan The Cursed Cohort

When the first Great War against Shaab started, the inhabitants of Adan faced an enemy unlike any they had seen before. The invading forces knew neither courage nor cowardice, neither resolution nor qualm, neither pain nor laughter. All the feelings and emotions inherent to people of Adan were completely unknown to the hideous monsters. They didn't seek land. They didn't seek slaves. There seemed to be only two things that drove the invaders: insatiable hunger, and a burning hatred for all that was born of the Original Flame. The dark armies of Shaab marched into countless realms in search of souls to be be tainted with the Blight of Abyss.

A large army of all of Adan's races stood tall on the Langrian Plane, ready to give the Dark Gods a fierce fight. Thousands of warriors formed even phalanxes along the arid wasteland, hundreds of artillery detachments prepared to rain lethal shells down on the enemy, and dozens of wizards silently prepared their incantations, gathering strength to unleash tremendous magical power upon the foes. The air trembled and creaked from the beating of giant wings: Dragons were preparing themselves for a decisive fight. That day, all past conflicts were forgotten. Humans and Elves, the bull-like Minotons, the resourceful Dedaire gnomes, the feline Fenris and the canine Kinos – all the peoples of Tartu stood under a united banner, fighting a common enemy. The Langrian Battle was one of the most dramatic episodes of the First Great War. 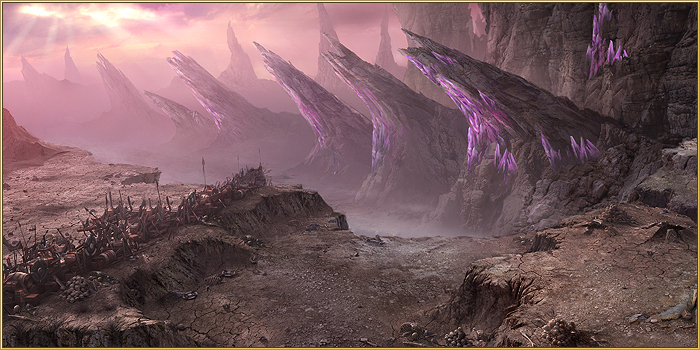 Joyous feelings of inevitable victory surged through the hearts of the combined legions, and it seemed that no other force in the universe could match the power of the unified army of Adan. But when an enormous shadow eclipsed the sun, the arrogant smiles faded. It seemed all at once that a black ocean had engulfed Tartu, obscuring the horizon with wave after wave of enemy hordes, marching relentlessly towards the defenders of Adan. The more that the warriors of Tartu looked upon the approaching monsters, the more they despaired. No more than two bow-shots remained between them and the armies of Shaab, yet the attacking forces were so vast that the end of their ranks could not be seen.

Desperation merged with suffocating fear when the warriors took a closer look at the otherworldly creatures, defiled by Blight, reeking of death itself. Everyone on the field felt the presence of an alien entity bent on contorting and devouring the souls of the living. Even the bravest warriors offered trembling prayers to the Creators and the Great Dragons. Still, they stood their ground, grasping their swords and spears firmly, resisting the urge to cast their weapons aside and run. 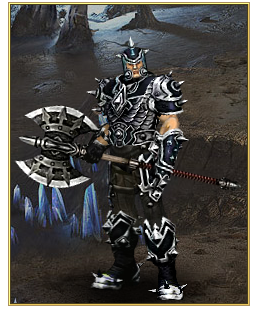 And yet there were some warriors among the Human armies who succumbed to the overwhelming sense of terror in their hearts. A gasp of surprise echoed through the ranks of the army of Adan when Carmin Gwintal, commander of the Fifth Cohort from the realm of Lardinia, ordered his soldiers to advance. But alas, he did not do so to set a heroic example of valor or to encourage others to fight to their last breath. Instead, Gwintal fell to his knees before the monster horde and so did his cohort. They begged for mercy and promised eternal service to the Dark Gods. The Abyss heard their call and the Fifth Cohort turned to face their former allies, carrying a Standard of Shaab instead of Adan's banners.

Silence fell on the battlefield. Overwhelmed by this betrayal, warriors of Tartu stood paralyzed. Even the wind became still in the face of this heinous act. But then, the Elder Dragons emerged from the sky, swooping down upon the monstrous hordes. Cries of agony broke the silence, followed by battle cries of Adan's defenders who rushed at the enemy, inspired by the loyalty of the world's winged guardians.

Only so much time did Gwintal and his men buy with their treachery. The defenders of Adan considered it their duty to punish the traitors, and within minutes, the Fifth Cohort was no more. A terrible price had been paid by the races of Tartu that day for their freedom, but with the help of the Elder Dragons, they managed to turn the tide of the battle, and force the enemy to flee. As for Gwintal's cohort, even the Halls of Peace, where all of Adan's dead go, were closed to them. The Great Dragon Velet himself ordered the Last Gates to be shut in front of the traitors.

From that day on, the tortured spirits of Gwintal and his men have roamed between the two worlds, finding neither peace nor redemption. Experienced warriors say that wherever a major battle takes place, the Cursed Cohort appears, seeking forgiveness from the Dragon of Death. They fight selflessly on the side of the weaker army, hoping to atone for their sins. Yet Velet remains impervious to their pleas and the Halls of Peace remain closed. No one knows if one day these men will find the penance they seek – or if they will wander the afterlife in their misery and pain forever.