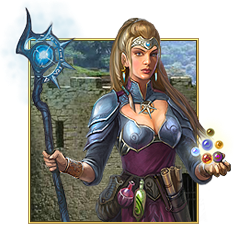 To arms, protectors of Tartu! The world of Adan is in danger again!

Powerful warlock Omnimach mal Adintar is in dismay after having a dream about an army that is being bred in in the Abyss. This time, the Dark Gods surpassed themselfes, creating Inquisitors, creatures of untold might that may conqueror Adan and bring Shaab the long-awaited victory. However, while these monstrosities are still few in numbers, there's still hope...

In order to open a portal into the the Citadel of Inquisitors, the High Magi need Particles of Original Chaos. These magical essences can be acquired in small amounts when fighting monsters whose level is no more than one below, equal or higher than your character's. Beware that the monsters during the Event will be stronger than usual. If you want a higher chance of getting the particles, fight other players in the , or in the .

During the first stage of the Event, brave defenders of Adan have a chance of receiving elements of the Star Ciklotor collection. Complete the Collection to receive 150 Experience and 100 .

Also during this stage you may acquire a unique trophy called the . Opening the Amphora will grant its owner and . Additonally, they may find inside , elements of the Star Ciklotor Collection and even the the main component for creating Tartu's ultimate weapon, the .

Read More about the Conquerors of Abyss Event here.