Warriors of level 21 and higher, new task are now available to you! 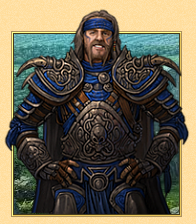 Just imagine how angry and depressed must a captain feel whose ship has just pulled through a terrible storm and barely escaped the grim fate of becoming a cozy shelter for the inhabitants of the sea. The sails are tattered, the rigging is tangled, the port holes are broken and the sides of the ship have more holes in them than Vaalorian cheese. Ship is a captain's most valuable treasure in the entire world, and there's nothing that brings more grief to a true sea wolf than to see the apple of their eye damaged within an inch of its life and in need of urgent and capital repairs.

Agden Gal Tark's vessel was severely battered during a storm, and the Vaalorian sea wolf now needs your help in repairing it before he can set sail for distant lands and oceans again. It won't be as simple as it sounds, though: you'll have to obtain an ingredient that ensures the ships is really waterproof, learn the secrets of making sails from special materials, and even try yourself in the role of a ship's gunner!

17/07/2014 20:46 Lord Rahl6
why do all of his quests seem to have the thing that depletes energy more?
that thing is so annoying lol
Reply QuoteRemoveEditBan
You need to log in or register before leaving a comment.
Site map
Do you really want to delete this photo?
nevermind
yes, delete