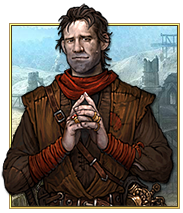 Warriors of level 58 and higher, new adventures await you!

Not a lot of people really understand the archaeologists, viewing them more as scavengers who under scorching sun or pouring rain are willing to dig the ground day and night, removing layer after layer after layer of earth, only to rejoice like kids about every pottery fragment, rusty arrowhead and piece of bone of animals long extinct  they find. But sometimes, discoveries they make open a connection to ancient times. Some of the things they find, albeit unimpressive and dull at first glance, hold such power that can be very dangerous not only to its knowledgeable finder, but to all people in the world.

Giehl Cardin needs help from a brave Imperial warrior who has years of War Academy training under his belt. The young historian suspects that the Titan artifact that was discovered during excavation near the Ancient Temple has great scientific and cultural value. Giehl will only entrust the artifact to someone who has proven his worth over and over again.

Unfortunately, the presentiments Giehl had about transporting the Titan proved to be true. Even the presence of an Imperial warrior couldn't avert the worst. As a result of a well-coordinated attack from two sides, the unique item disappears. Soon thereafter, strange and inexplicable events start happening. Is there a connection here? You can only learn the answer by tracking down the mysterious robber.