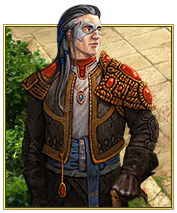 Warriors of level 57 and higher, new adventures await you!

Mortals only have one life, so every inhabitant of Adan who knows what's better for him will hurry to the nearest healer, medic or a wizard whenever he gets strange symptoms. It's always better to nip the sickness in the bud rather than fight it when your health is gone. Although there are some exceptions to this rule.

During an attack on a secret explosive material lab located not far from Helgar's brewery, Imperial forces met with fierce resistance from unusually powerful Half-Blood raiders. The only assailant they captured alive showed symptoms of an unknown disease.

Eyewitnesses claim that the skin of the prisoner is covered with stone growth that protects him from cold steel better than Imperial armor! Secret service has been tasked with investigating this strange affliction. The sooner its cause and ways to cure it are discovered, the smaller the damage that the stone-armored raiders deal to the well-being of the Empires.