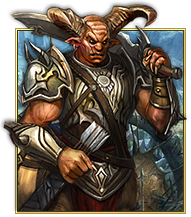 Warriors of level 55 and higher, new adventures await you!

Far to the east, across the vast ocean waters, are large forest-covered island inhabited by the race of creatures called the Krolds. These large-sized aborigines have been known to the sailors of Tartu for a long time, but never before has anyone paid any real attention to them. Except maybe for some opportunists and treasure hunters who confronted Krolds on their soil, but it had never led to a major conflict or a full-scale war.

Mainly because the homeland of Krolds doesn't have any substantial riches to offer. Another reason would be that the Krolds were reluctant to add to their territories, preferring civil feuds to expansion to other continents. They seemed to be very comfortable with this way of life but for some reason that yet has to be revealed, their reclusive lifestyle has come to an end.

H'aaf-Russum, chieftain of the peaceful nomad clan, is full of worries. Armor-clad warriors have appeared in the steppes, and H'aaf-Russum doesn't think that these horned strangers have come with good intentions. Though the weapons of the outsiders are primitive and the armor is way below even the standards of Humans not to mention the Dedaires, they more than make up for it in strength and ferocity, challenging Taurs head-to-head. But the invaders don't seem to be interested in direct conflict as much as in the mines below the Bleak Hills. The same mines that are infamous for their maze that no one has ever come back from.