Rise of the Machines

Warriors of level 53 and higher, new adventures await you! 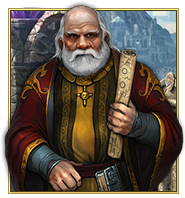 Dedaires are one of Tartu's oldest races whose chronicles are at least as old as those of the Elves. Physically inferior to most of the continent's inhabitants, these dwarfs had to adapt and chose to survive by using their brains and not the brawn. And survive they did. When Fenris and Kinos fought each other in primitive leather outfits, Dedaires had already invented an almost invincible metal-plate armor.

When the Minotons began construction of their wooden forts, the Dedaires were already building stone fortresses and citadels. When the Humans made their first steps on the path to understanding magic, the Dedaires revealed the wonder of powder to the world and created cannons that could bring down the strongest of walls. When the Dragons clashed with their own kin across Adan's skies during the war against the Tangors, the Dedaires helped the nations of Tartu by providing death-bringing flying machines. And now the latest inventions of the Dedaires' brightest minds, the autonomous Machinoids, are about to change the life of Tartu yet again. But in what way?

Chaos is reigning in Dagdor while the usual order crumbles. One by one, Manipulators, Drillers, Loaders, and Steamdroids go haywire, disregarding their duties to extract minerals or help Dedaire engineers and attacking everyone in sight instead. It's been hundreds of years since the people of the Stone City last had to protect their homes from an enemy. Their combats skills ahve faded since then. And how do you fight an enemy when you don't even know what and when causes it to attack you? The Dedaires are praying for an Imperial warrior to spearhead a counterattack on the malfunctioning Machinoids and to reveal the reason and the person behind this strange revolt!

New adventures start with the Quest of Shtold Ventos "Meeting with Shtold", available at level 53.

59
is this the one that came out ages ago? if not i dont have the quest

As far as we see you've finished first quest in chain already ;)
Reply QuoteRemoveEditBan
Show Changes
You need to log in or register before leaving a comment.
Site map
Do you really want to delete this photo?
nevermind
yes, delete