Adventures on Land and Sea

Warriors of level 27 and higher, new adventures await you!

As ill-reputed a scoundrel as Skinflint Bron is, he never refuses to help you, even if for a small price. Now it's time for you to return the favor and help the greedy merchant out of a scrape.

First, treacherous pirates had outweaseled the weasel as if he were a featherheaded villager, and then, if it weren't enough, Darkguards showed up at Bron's doorstep and gave him a good beating. Now, Bron thirsts for revenge, designing a plan that will turn the lives of the wrongdoers into hell but at the same time allow Skinflint to stay incognito - his sides still remember the weight of the Darkguard boots. 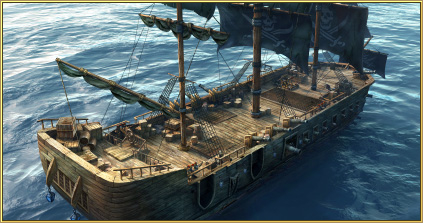 Help Bron put his devious scheme to practice and kill two birds with one stone: the mysterious Darkguards and the insolent pirates who seem to have no shame at all. During this adventure, you will visit a real pirate ship, battle against its owners and, if you're lucky, even help in chasing down someone who's been on the run for a long time.