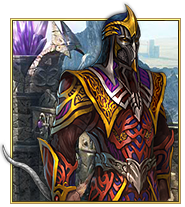 Dangerous expeditions into the Maze of Eternity are finally beginning to pay off! A group of daredevil adventurers went deep into the mysterious dungeon and discovered cryptic manuscripts which the only surviving citizen of Khateram Yshen Carr recognized as the writings of the vanished caste of Khateram's high mages - the Exarchs. After decrypting the special code used in the manuscripts, Yshen Carr acquired a formula for a magical Phial that can instantly restore your Mana.

Yshen Carr hasn't forgotten that isolation from the world was one of the reasons for his city's downfall, so he immediately shared his discovery with mages of Sadar and Vaalor under one condition: only those warriors who contribute to the cause of fighting Shivari and their undead slaves are allowed to purchase the Phial.

The Phial of Mana Surge can be purchased in the Reputation menu after earning the required amount of the respective reputation. The Phial can be used in combat from the Quick-Access Panel or directly from your Backpack. It instantly raises your current amount of Mana but can only be used once per 200 rounds.