Map of the Maze of Eternity

Warriors that venture into the are the bravest of their kind. Complaining about hardships such as the lack of a map is not in their nature. However, Shivari's sworn enemy Yshen Carr is working day and night to make the fight in the monster-infested dark tunnels easier. Soon, he will present his Map of the Maze marking important areas and places of interest. 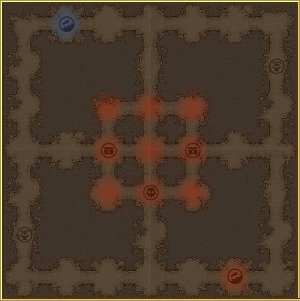 The color of the entrance icon shows which entrance is used by which Empire.

Fountains of Rejuvenation restore your Energy, allowing you to continue your journey through the Maze. Unless, of course, someone drains it before you arrive. Don't worry, though, an empty Fountains refills over time.

These icons mark the spots where the magical treasure chests may be located.

Shows the place where an Elite Monster has been spotted.

Red color marks areas where monsters respawn much faster than in other parts of the Maze.

P.S. The maximum number of active Spells for an Elite Vervelak in the Maze of Eternity is now twenty four. Also, with each additional warrior who joins the fight against this monster, a Cadaver Minions is summoned. While the Vervelak is alive, all of his Minions have significant damage reduction.

38
What about the restrictive times you can enter? Also improved? Otherwise pointless
Reply QuoteRemoveEditBan

60
Agreed...
Fluffybears need to consider people who are not on their timezones.
Reply QuoteRemoveEditBan

58
interesting change, but part of the fun for me was running around figuring out what was where before the Horror could get us. I like the map, it'll make hunting faster..... if we could get to the maze Whenever we had the group ready.
Please get rid of the time restrictions as soon as possible. I still do not understand why time restrictions are needed, can you tell us why?
Reply QuoteRemoveEditBan
3 weeks without proper internet means a cranky kitty needs some war time!
You need to log in or register before leaving a comment.
Site map
Do you really want to delete this photo?
nevermind
yes, delete