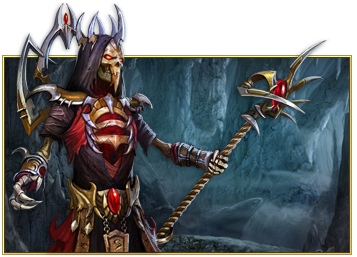 For millenia, the mysterious Maze of Eternity that fountains and brims with magical energy remained the biggest and most-protected secret of the people of Khateram. The alien race of Shivari destroyed Khateram a thousand years ago but was eventually forced to retreat to their homeworld, unable to overcome the protection of the Storm Towers. But as centuries passed, the magic of the Towers faded; and now Shivari are coming back, stronger than ever, to claim the Maze for themselves.

Dreadful Enslavers who lead their demonic hordes subdue everything in their wake, making no distinction between mindless monsters and valiant defenders of Tartu. Shivari can sense the emanations of the Maze and will stop at nothing to get to this source of endless magical energy. If they succeed, Tartu will be just the first of their victories. The very foundations of reality will tremble at their footsteps...

Warriors of level 50+ are the last line of defense against the Shivari and their undead minions. With Yshen Carr's help, they will have to open the Twilight Portal that allows entrance to the Maze of Eternity. Inside lurk the invaders that must be destroyed before they reach their goal. Those who dare to venture into the Maze will be generously rewarded with Chests of Dead, Sydian, as well as

that can be traded for Shivari Rings

But think twice before you enter the gloomy tunnels of the Maze, for peace treaties that work on the surface mean nothing down there. Monsters and other warriors alike will try to stop you. And don't forget about the danger that comes from the dark - the terrifying Horror of the Maze.

Warriors of level 50+ have a new challenge to beat: the Fang Cave near the Ruins of Khateram. Inside await hordes of monsters enslaved by Shivari as well as their enslaver, the dark wizard Kaptor Khathu. Defeating him may earn you Chests of the Undead, Cursed Coins and Elements of the Staff of power Collection.

Maze of Eternity is the only place where the Undead Hunter Reputation can be earned. There are several ways to do so: by assembling the artifact that allows to teleport into the Maze, by completing the Collection of Shivari magical weapons, or by killing the enslaved monsters and their masters in the Maze.

Experienced Undead Hunters gain access to Infusions of Fury that can be purchased to accelerate the process of turning into a Nephilim, and Extracts of Antimagic that grant protection from enemy spells.

Undead Hunter Reputations is also required to purchase Shivari Rings that weaken your enemies. These unique pieces of Jewelry are available from the fearless tomb raider Helma in the Ruins of Khateram.

49
Can the ultimate extracts be used along with kandelas?

Only one extract or kandela can be used at time. If using ultimate extract, you won't be able to use Kandela.
Reply QuoteRemoveEditBan
Klaatu Barada Nikto Live life, it's the only one you'll get. (I live on a sailboat! :P)
Show Changes

47
hmmm. wondering if there should be a way to upgrade blue gear to purple
Reply QuoteRemoveEditBan
You need to log in or register before leaving a comment.
Site map
Do you really want to delete this photo?
nevermind
yes, delete