Brave warriors and brave warriors, the world of Dragons begins preparations for the celebration of the New Year! 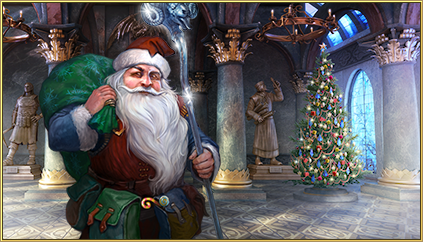 Also, Squalyga Bron informs that On December 19, exactly at 12:00, the season special offers for the purchase of reals.

According to a long-forgotten tradition, from 25 December to 3 January will be held festive Days of Combat Steel, during which all brave warriors will be able to mine and . Also during the event the equipment will not break.

Grandfather Khladomir is seriously excited this year, every year the influence of Trag on his lericons wards is getting stronger and stronger. Having recently overheard the conversation of several elves, he found out that after the New Year holidays, they are going to steal all the remaining gifts from the warehouses altogether. Anyway, already On January 3 we will find out what they are up to...

Happy holidays! And may luck never leave you!