The Ice Army has been defeated but Trug still won't surrender. The pernicious giant possesses formidable magical powers in addition to his supernatural strength. Trug turned to magic and cast the Spell of Irrepressible Greed on the Laerycawns! Subdued by Trug's enchantment, Snowflake's little helpers have escaped their workshops and warehouses, grabbing Christmas gifts which were intended for the people of Adan. The holiday is in danger again. If we don't return what's been stolen, there will be no Christmas! 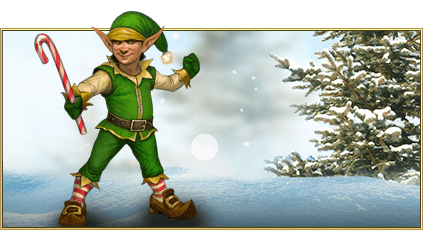 It is up to you, warriors if the two Empires, to return the stolen gifts before celebrations begin. Fortunately, the charms Trug put on the Laerycawns aren't very strong, and a few good punches and kicks will be all it takes to dispel them. Don't worry, the little fellas don't feel any physical pain. They'll even say thank you when you destroy the magic that enslaved them and will be happy to return the gifts. However, don't let the description of the task fool you. It surely won't be as easy as it sounds. You have to make haste, otherwise Grandfather Frostmir won't have enough time to deliver the gifts! You can find the bewitched runaways in the Village of Landor, among the Strekade Nests, and near the Gates of Dagdor.

Return 65 Gifts to receive a Large Gift from Snowflake. Warriors who don't stop at that and return 650 Gifts will be additionally rewarded with an awesome prize of their choice:  or the Ice Rod.

The fourth phase of Christmas Adventures begins with the Invasion of the Ice Army Quest, available at level 9+.