This year, Trug really means it! In addition to Durgs, he has allied himself with other mighty creatures. Fix your armor, sharpen your blades and prepare your spells, defenders of Tartu! You'll have to defeat them all if you want Christmas to happen! 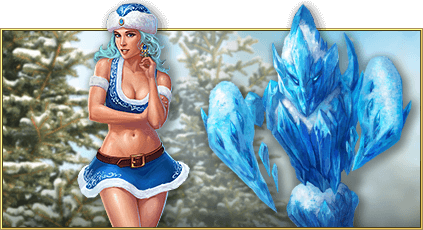 Golem Brothers
On Trug's request, Golem brothers Hobble and Baroob amassed an army of their kin and drove miners out of the Mines of Tagol. The attack site wasn't random: important components for Christmas fireworks are extracted in the Mines, so warriors of Tartu must defeat the stone army and the siblings that lead it. You can find the Golems in the Cave of Prophecy near the Mines of Tagol.

Crystal of Eternal Cold
Some hunters have stumbled upon a Durg Hideout not far from Helgar's Brewery, where the Crystal of Eternal Cold is kept. It remains unknown how Trug managed to deliver this artifact to Tartu, but weather forecasts for the continent aren't looking good! Unless the Crystal is destroyed, Tartu will become a lifeless frozen barren. Beware that while the Crystal can't attack you, it can still summon Durg guards for protection.

Summoned Spirit
It seems that Trug has made a deal with Ice Nylphs. A patrol has run into them while they were performing a strange ritual in the Cave of Freezing Fire near Tartu's eastern seaboard. The ritual was successful and an otherworldly spirit was summoned. Whatever the nature of the spirit, it must be sent back to where it came from.
Find the Nylphs and their mysterious guest in the Cave of Freezing Fire near Cape Wyvern.

Slay monsters in each of these caves to receive a . Complete all three Quests and you will be rewarded with a .

A Christmas Shop has opened its doors to customers on Winery Crossroads. There you can find unique holiday items that can be purchased for Gold or , acquired for completing Christmas-related Quests.